Bert Logan, a Hudson’s Bay employee, and his wife were well respected in the communities of Little Red River and Fort Vermilion. They had been transferred from Fort Simpson, North West Territories to Little Red River, Alberta with the Hudson’s Bay Company. After returning from a holiday in Quebec, Mr. Logan was unpacking a trunk of clothing to distribute to the settlement when he became very ill. Mrs. Logan was a nursing sister of the Gray Nuns, and recognized the illness as diphtheria. 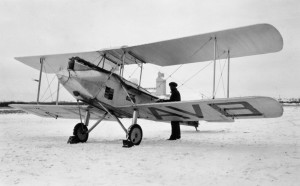 She asked William Gray and his son Bobby to go up river to Fort Vermilion for Dr. Harold Hamman. The father and son immediately set off on the river highway, But first had to test the ice, as it was the first trip they had made on the river that winter. The doctor traveled by dog team back to Little Red River with Mr. Gray, and upon seeing Bert Logan, confirmed that he had diphtheria. Little could be done for Mr. Logan, as he had now been sick for seven days, and was experiencing extreme difficulty breathing; however, Dr. Hamman knew the urgency of getting serum for inoculating the other people at the post. Dr. Hamman requested that William and Bobby Gray return to Fort Vermilion to request that Gus Clark have a message taken to the telegraph office in Peace River where a message could be sent to the Edmonton Department of’ Health. Gus selected Joe (Dollar) LaFleur and Joe’s son-in-law William Lambert to make the trip, as they were very experienced river men. 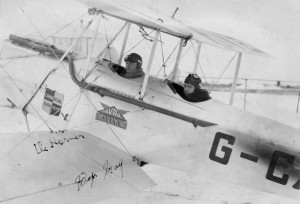 LaFleur and Lambert left Fort Vermilion on December 18 for Peace River with Lambert’s dog team and sleigh. They also loaded Joe’s dog team and toboggan with staple provisions such as Bannock, potatoes, Bacon, tea, sugar, coffee, and Beef. They brought wild duck feather robes and a few bear hides to put under themselves on the ground at night. To keep warm, a long fur parka topped their heavy clothes. Up-river from Fort Vermilion, the river was glare ice, and to the dismay of the two men, Joe LaFleur fell through the ice. They had to return to Fort Vermilion, and weren’t able to leave for Peace River until three days later. The trip was very cold and slow as temperatures dipped to -50 degrees Celcius. It took the two men four days to get to the settlement of Carcajou on the river, and another four days to travel by land to Peace River. The trip was about 280 miles, and they arrived in Peace River on New Years Day. The two men delivered their message, and were immediately placed in the hospital in Peace River to recover from the flu.

Meanwhile, the Grays rested for a few days at Fort Vermilion, and gathered some supplies and mail for the their trip back home to Little Red River on December 24, 1928. They spent the first night at Clement Paul’s sawmill, and to their horror the next morning a Chinook had blown up, melting all the snow on the river, turning it into a gigantic sheet of ice. Their horses were not shod and could not manage at all. William Gray went back to Fort Vermilion to get some horse-shoes, and on the evening of Christmas Day the horses were shod at Clements. Early in the morning of the 26th, William and Bobby Gray once again headed for home. On the trail, they met Francis Bourassa and his team struggling on the ice; his horses were not shod either. With Mr. Bourassa were Dr. Hamman, Mrs. Logan, and her now deceased husband Bert Logan who had passed away on December 22, 1928.

Bourassa had tied gunny sacks to the feet of his horses, but it was still a poor substitute to shoes for the horses. They were having extreme difficulty standing on the glare ice. Dr. Hamman, Mrs. Logan and the body were transferred to the Gray’s sleigh, and they headed back to Fort Vermilion with the load. Someone traveling by dog team ahead of the Grays alerted Fort Vermilion of the arrival of the party, and approximately ten miles from Fort Vermilion they were met by the R.C.M.P. and told not to enter the village with the body. Bobby Gray stated, “This was the only time I ever saw Dr. Hamman lose his cool.” They then proceeded to the Anglican Cemetery, just east of the settlement, where they left the body.

When Dr. Malcolm Bow, Deputy Minister of Health, received the telegraph he immediately contacted “Wop” May a pilot (who was visiting family in Calgary). Dr. Bow said, “Wop replied. We’ll go tomorrow”. Wop called Vic Homer in Edmonton and asked him to get their aircraft ready. The aeroplane was an Avro “Avian” biplane, on wheels – hardly appropriate for flying into Northern Alberta in mid winter.

On the morning of January 2, 1929 they were ready to go. It was -20°F (-28°C) with a wind, low ceiling and ice fog. The aircraft was moved into position, the pilots dressed in heavy coats, pants and felt boots, received the serum from Dr. Bow and Mayor Bury, boarded the plane and at 12:45 pm headed north. 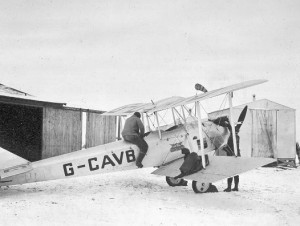 They followed the Edmonton, Dunvegan & British Columbia Railway tracks North to Smith, then along the South shore of Lesser Slave Lake to the village of McLennan – flying at less then 500 feet due to the snow and headwinds. Along the way they had to stop somewhere as the package of serum in the baggage compartment (wrapped with a charcoal heater in a blanket) caught fire – they had to land the aircraft, throw away the blanket & charcoal heater and put the serum in their pockets, armpits and groin area to keep it warm. At 3:55 pm they landed on Kimiwan Lake at McLennan for the night as it was getting dark. The flight time was just over 3 hours – a distance of 267 miles. They stayed the night.

At 9:40 am on the morning of January 3, 1929 they departed McLennan and following the railway line arrived in Peace River just after 10:30 am – a distance of 50 miles. They landed on the ice of the Peace River and taxied to the area along the river where the paddlewheel steamers were docked. They refueled the aircraft here.

At 11:45 am they left they flew under the railway bridge before heading north on the last leg of the flight to Fort Vermilion arriving about 3:00 pm – a flight of 250 miles. The weather cleared as they left Peace River. The citizens of Fort Vermilion had cleared a landing place on the Peace River and plane was met by the R.C.M.P. – about 30 minutes later Dr. Harold Hamman arrived from Little Red River and photos were taken. A dance happened to be scheduled for that evening, so as everyone entered the dance hall, they were required by the R.C.M.P. to receive an injection of the serum.

Dr. Hamman ensured that everybody in both communities received the inoculations. Mrs. William Lambert said some years later “There wasn’t much Christmas spirit that Christmas for we had our families scattered up and down the river. We were thankful that our families could help others, and happy to have them home later in the month of January.”  Thankfully, Mr. Bert Logan’s case was the only one in the terrible scare and the community was, and will be forever, grateful to all those who had a part in the drama.

Wop & Vic left Fort Vermilion the next day (January 4th) – taken by Vic Horner, shows Wop standing by the plane which is warming up prior to the flight back to Peace River – a gasoline drum sits to the left and the local people watch the preparations. Again it was another cold, snowy day and on this leg they would have troubles with the engine which was cutting off from time to time as a result of the automobile gasoline they had used to refill the fuel tank. The flight would take over 3 hours.

In Peace River major repairs to the engine were necessary as a result of the bad fuel – Wop is shown here working on the engine. They remained in Peace River for two nights and on the morning of January 6th headed out for Edmonton – a trip of 317 miles and a flying time of just under 4 hours. On this leg of the flight it was snowing hard, -33°F – anything but friendly weather!  W.W.II fighter Pilot Doug Matheson of Edmonton who was at the Edmonton Airport when they returned described the scene – “The old Steam Engine was puffing in from Calder, and suddenly out of the steam came the little airplane.”

During the 5 days of the flight and media frenzy was taking place – “Race against death” – “What Price Human Life?” – “The Government should not gamble everything on the audacious courage of two Edmonton fliers”. When the telegraph from Peace River arrived saying they were on the way the word got out, and a crowd of 10,000 people rushed to Blatchford Field to greet the returning heroes. Vi May said “Wop had to taxi the plane to the end of the field because the crowd was rushing the plane and he was afraid somebody would be hurt by the propellor. The total flight was 1,240 Miles (2,000 Km) and a flying time of over 14 hours. 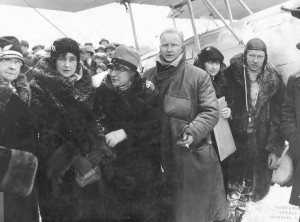 On arrival Wop & Vic were greeted by family & friends, presentations were made and Wop looked very uncomfortable – biting his lips. Someone had told him that if he covered his face with a silk scarf it would not freeze – he tried that and when he landed he pulled off the scarf, and all the skin came off his lips.

At a civic ceremony both Vic Horner & Wop May were presented with engraved watches. The engraving reads: “Presented to Wop May as an Appreciation for the Epoch Flight with Vic Horner to Fort Vermilion – January 2, 1929 – From the Boys” 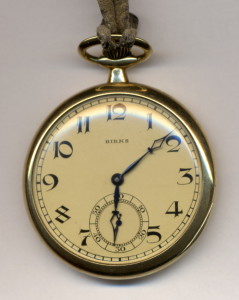 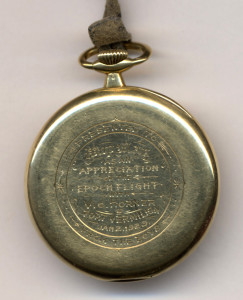 Canada Vignettes: Wop May by Blake James, National Film Board of Canada