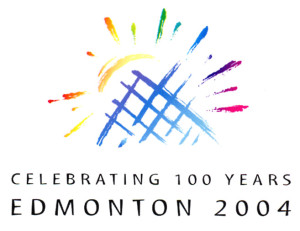 On January 2, 2004 we had the pleasure and privilege of re-enacting an amazing historical event. Seventy Five years earlier, on January 2, 1929, two brave aviators Wilfrid “Wop” May and Vic Horner took off from Blatchford Field in Edmonton, in a small open cockpit Avro “Avian” biplane, on wheels, with a precious cargo of diphtheria anti-toxin serum wrapped in a blanket, around a charcoal heater, to ensure that the serum would not freeze.

On another cold winter day, a large group gathered at the Edmonton Flying Club to witness the re-enactment of that event. With greetings and best wishes from such key people as Mayor Bill Smith (who presented a plaque from the City of Edmonton), Lieutenant Governor Lois Hole and surrounded by a keen crowd of friends and members the Aviation community and the Edmonton Press, TV & Radio Stations. The travelers included Marg & Denny May, Gloria & Bob Horner, Gary Friedel (MLA), Teresa Williams of Canada Post and Nick Lees of the Edmonton Journal. The friendly pilot of the Pilatus PC-12 aircraft was Staff Sergeant Jerry Klammer of the R.C.M.P. After the ceremonies were over, we took off at 11:00 AM on a frosty -25E morning, complete with a brisk wind. We warmed up inside the aircraft.

Our first stop was Donnelly Crossing airstrip. It was a cold landing strip but a warm welcome. We were quickly whisked away in warm vehicles for the 5 km drive to McLennan. After a visit to the large Mercy Flight wall mural – which included an excerpt from Sheila’s book “Wings of a Hero” – 25 gathered and enjoyed a fine buffet lunch at a nearby café and the presentation of 2 McLennan History Books by Mayor John Kachuk . These folk were proud of their part in the historical event and pleased that it was being re-created.

In mid afternoon we were ferried back to the airstrip for the short 20 minute flight to Peace River and another enthusiastic, warm welcome. We boarded a coach and Adele Boucher was our guide for a special tour of the area. We had a glorious view of the whole area from the grave of Twelve Foot Davis overlooking the junction of the Peace and Smoky Rivers. Then it was down to the riverfront where Wop & Vic landed on the ice those 75 years ago. The railway bridge is still there but the paddle wheelers are a thing of the past.

We checked in at the Travellers Hotel then joined an informal reception in a private room. The Museum had put together a fitting display to honour the occasion. There was an excellent buffet supper for 50 of us and after supper more joined us to listen to the talks, heard the stories and again presentations were made by M.L.A. Gary Friedel ( a plaque from the Alberta Government) to us and Mayor Lorne Mann ( book of wonderful photos from the “Peace”). There was a lot of history in that crowded room – a descendent of Sir Alexander Mackenzie, Stan Lawrence (son of Sheridan Lawrence – “Emperor of the Peace”), son of bush pilot Barney Cooper, and the grandson of Frank & Mary Percy Jackson. As stories were told it was so apparent that they were proud of their history and the part they and their families have played in that history. It was also apparent that the Edmonton City Center Airport has played and continues to play an important role in the lives of Northerners.

After a good rest and a relaxed morning we met our plane and Jerry at the airport and took off at 11:30. I had the pleasure to join Jerry in the cockpit as we flew over bush and then the broad plateau of farms in the La Crete area. When we landed at 12:15 we were greeted by a large flotilla of vehicles ready to whisk us into town. The original plan had included traveling the 5Km into town by horse & wagon, but in the -35E temperature we were delighted to see warm vehicles awaiting us.

Our first stop was at the hospital to deliver the parcels of serum to Dr. Carson Breen and Reeve Bill Neufeld. The hospital is fairly new, built in 1984 and serves a large area. While there we talked to Nellie Sokoloski (age 92) and her daughter Fran Forest. Nellie was there in 1929 and remembers serving the Bush Pilots in the Café where she worked. We also met Stan Smith (age 86), who as a young lad of 11 watched the original flight land on the Peace River near the old hospital. Stan had a strong grip and while he told Denny “it was just speck in the sky” he was griping his hand and would not let go.

We were next driven to the legion Hall where we were met by 250 people and a wonderfully tender Roast Beef buffet served by the Fort Vermilion Seniors. Considering the population of the town is 900 that was a remarkable turnout. After dinner there were more stories and presentations. We discovered more details about the roles that people played in 1929 in getting the message out. There was more than pride and nostalgia in this large group. There was also a real sense of gratitude to the two brave pilots who faced overwhelming odds to bring the gift of life to the community. As they reminded us, if they had not come and if an epidemic had broken out it could have wiped out most of the community, particularly the aboriginal people who had no immunity to white mans diseases. We felt proud to be there as a reminder of their past and their role in the history of Alberta. We were presented with another plaque and a box containing an inscribed pocket watch – the inscription on the box reads, in part, “thank you for keeping the memory alive”.

At 4pm it was time to leave the scene of happy memories and we flew due south to Edmonton – Denny rode with Jerry in the cockpit.

What a memorable experience for all of us on that aircraft. It was a vivid reminder that our northern neighbours are truly our neighbours and deserve our friendship and consideration.