The United States Army Air Force was supplying fighters and bombers to the Soviet Union – these would all pass through Edmonton and it was a spectacular sight to see the aircraft lined up at Blatchford Field in Edmonton.

1,000 aircraft were being delivered via the Northwest Staging Route – Edmonton to Snag, Alaska. Many of these aircraft were being ferried by American and Russian Pilots and many aircraft crashed en route due to mechanical difficulties, unpredictable weather, lack of navigational aids and inept flying. Too many pilots were suffering needlessly as help could not be provided fast enough. Something had to be done. Planes from #2 A.O.S. were involved in searches – pilots were dying from exposure.

“Wop” May decided to organize his own air rescue team – able to parachute into a crash site – it was composed entirely of civilians from Canadian Airways Training Ltd., working at # 2 A.O.S. Larry Poulsom, Owen Hargreaves, Wilf Rivet and Scotty Thompson volunteered to help organize and be part of the team.

As “Wop” May told the story, “…it was hard to get at them and they could not land, that was what gave us the idea for the rescue squad. A fellow said he had done all kinds of parachute jumps – I wanted to see him put on a demonstration. He and four besides himself jumped – not one of them had jumped before. We kicked them out over the airport. One guy landed on the wing of an aeroplane and went right through, the other guy landed on the American Officers’ Mess and another guy landed flat-footed on the runway. That was not very good. We tried it again. The next guy came down wrong, one landed on his fanny on a pile of rock – he bounced about 6 feet. I got nervous and thought I would not like to see these fellows jump in the bush.”

“We talked to the Americans. There was a very fine fellow by the name of Colonel Nightingale. He arranged that we sent some people to Missoula, Montana where they trained smoke jumpers. We got these people started and we then got them organized and trained more people and used them until the end of the war. The Air Force thought so much of them that they took over our complete unit and operated it as the Search and Rescue unit.”

“Wop” May presented the plan to Air Force HQ in Ottawa and an inspection team saw a demonstration of their work – they were impressed and plans moved ahead. Larry Poulsom, Owen Hargreaves, Wilf Rivet were enlisted as Sergeants – Scotty Thompson had lost his life in an accident.

3 Graduates of the first course were posted to Dartmouth, Nova Scotia and 5 went to Sea Island, 3 stayed in Edmonton to instruct on the next course. In 1945 the Sea Island section conducted their first search for a B-24 Liberator with 11 on board – during the search 4 other aircraft were found. In 1947 Search & Rescue was set up in Halifax, Rockcliffe, Winnipeg, Edmonton and Vancouver.

In 1947, Brigadier General Dale Gaffney of the United States Army Air Force presented “Wop” May with the Medal of Freedom, with Bronze Palm. The citation read:
Mr. Wilfrid Reid May, Canadian Civilian, performed meritorious services for the United States Army Air Forces from January 1942 to January 1946. Mr. May, serving in the capacity of Superintendent of the Air Observer’s School at Edmonton Municipal Airport and later as District Manager of Canadian Pacific Airlines, voluntarily loaned the personnel and the facilities of his school to assure the delivery of aircraft to the Aleutians and Alaska without delay.He conceived the idea of aerial rescue crews for rescue of flyers in the bush area, and after developing a trained parachute squad he furnished a rescue service indiscriminately to Americans and Canadians thus saving the lives of many of our fliers. In do doing he fulfilled the highest traditions of the Dominion of Canada. 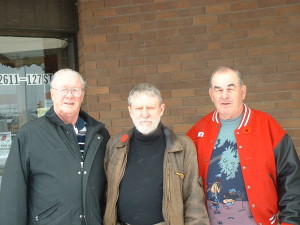 In 2002, Denny May, son of W.R. “Wop” May was made an Honorary Life Member of the Para-Rescue Association of Canada the presentation was made by Lyle “Curly” Sproat (left) and Bill Krier (right) in the photo above..